The Science of Broccoli

What do broccoli, cauliflower, brussel sprouts, cabbage, and kale have in common? And nope, they're not just vegetables!

The scientific name for broccoli— that bitter-tasting, almost alien-like green vegetable— is brassica oleracea. Translated, the oleracea part literally means ‘edible vegetable’. It’s as vague as it gets because that suprisingly iconic culinary plant has been around with us humans ever since the dawn of civilisation.

The term brocolli, in actual fact, refers to a specific part of a more generic plant. If you’ve already deduced this by now (or you just happen to have studied first-year bio), broccoli comes from the same plant species that also gives us kale, cabbage and even brussel sprouts. That is, brassica oleracea.

Below is what B. oleracea looks like in the wild. It’s also probably what it looked like hundreds of years ago, before we turned it into the plant that gives us our modern array of dinner plate leftovers. 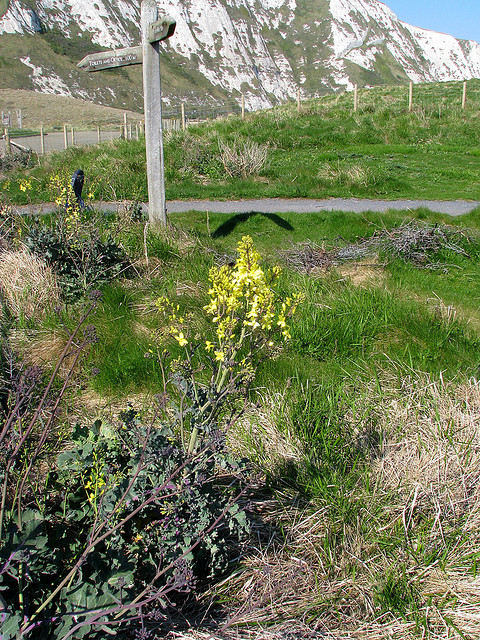 The flowering part of the plant (those yellow tips in the photo)— that’s brocolli. Actually, an entire bouquet of that plant’s flower buds is what makes up broccoli. Yep, that’s right: when you bite into brocolli, you’re really biting into hundreds of B. oleracea flowers.

Now how about those other vegetables? Let’s start with those huge laves: that’s kale, which we’ve then bred over centuries to become more rigid in the form of tightly packed balls (brussel sprouts). We’ve even decided to take that even further and turn those tiny little sprouts into much larger (maybe even purple) versions— which is what we know today as cabbage.

How is this possible? How can a single plant become many? The answer lies in selective breeding. Think humans: we’re born blonde, brunette, blue eyes or brown. Actually, think even further: dogs.

Just like broccoli, dogs share a more recent common ancestor. Over time, humans have domesticated dogs to express certain characterstics— scientifically, phenotypes— for many different purposes. But what’s interesting is that because they’re essentially species, you can cross-breed them to get intermediate breeds! (Talk about doing it, broccoli-style!)

For the non-bio students reading this, here’s a little bit more about breeding: even though broccoli, kale, cabbage and cauliflower all look very different, they all share the same base set of genes. What makes them look different is that certain genes are ‘turned on’ based on the way they’ve been bred and propagated— so the genes that express the dotted look of broccoli are also in the genome of kale, except they haven’t been expressed.

In fact, this same idea can also explain why only some of us humans really love (or hate!) this bitter vegetable.

There’s a specific gene shared by us humans called the TAS2R bitter receptor, and you’ve probably guessed, it is responsible for our repsonses to bitter-tasting foods. We’ve evolved to have this gene as a defense mechanism against potentially dangerous substances— such as for example, if we were trawling through the wild with no food in sight, we’d need to be able to figure out whether a food is poisonous or not.

Just to make things clear, broccoli isn’t dangerous— but broccoli itself has evolved to also have a gene to express bitter-tasting chemicals. This is because broccoli’s such a nutrient rich plant, which a lot of predators look for— and thus use the bitter taste to fend off any that would take a bite into it.

So, this taste-receptor gene in humans TAS2R— works the same way. We express a set of proteins that make some of us really hate that bitter taste. And there are the lucky ones who literally cannot taste the bitterness of broccoli! Talk about a phenotype for broccoli-lovers!

And that’s the science of broccoli. As it turns out, it’s more than a side-dish. It’s a vegetable with a story— and its roots go way, way deeper!

Sources are embedded in the article links, the photo of wild brassica oleracea is from Flickr user –Tico– is licensed under CC BY NC ND 2.0, the photo of broccoli is from Unsplash under a royalty-free license, and the header image is used under a public domain license.