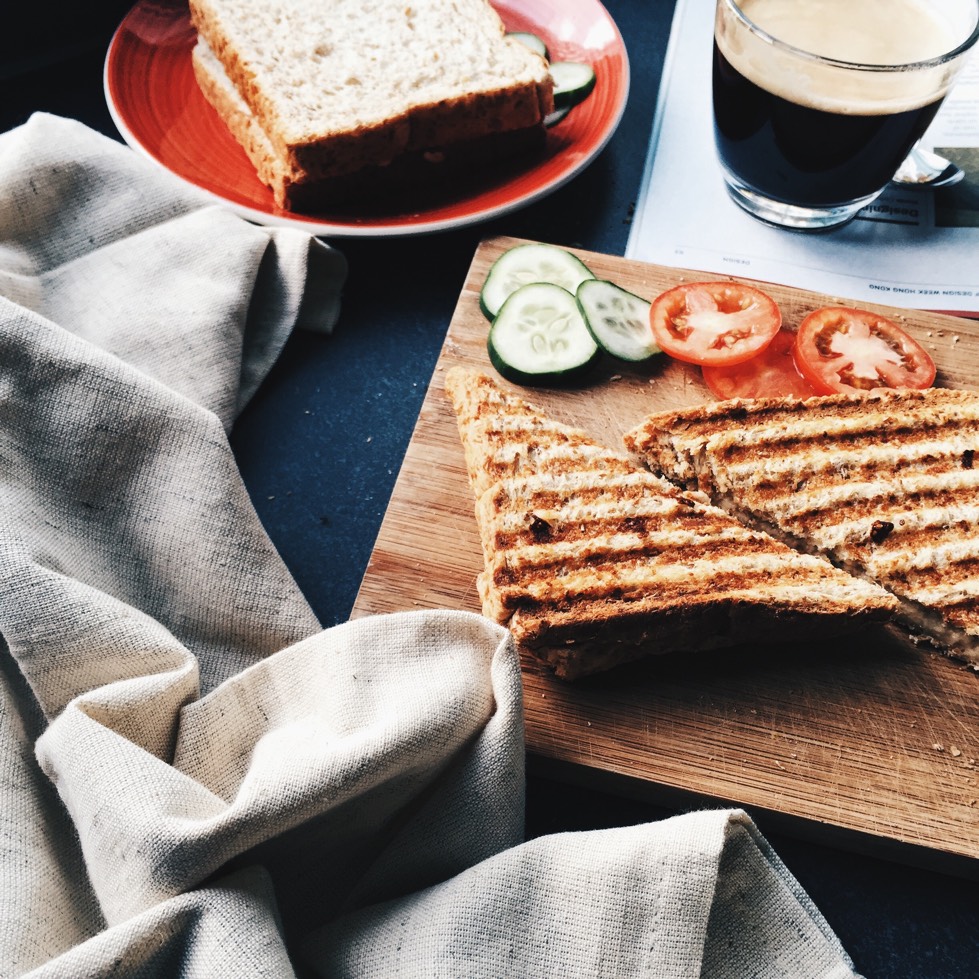 How Hype-worthy is the Optimal Packed Lunch?

Uncovering the mathematical relationship between Hype, Cost, Time and Deliciousness

Whenever you decide what you’re going to have for lunch tomorrow, you’re actually balancing tradeoffs between time, cost, and overall deliciousness. And when you factor in potential hype, the decision can become even more complicated.

Is there a way to determine how satisfied you will be depending on the lunch you choose? And is there a way to do it that’s accurate and valid, all the while accounting for a person’s subjective level of hype?

It began with a relationship between the tastiness versus overall satisfaction of a packed lunch. That is, the deliciousness of your lunch is proportional to how satiated you’ll feel after eating it.

This is common sense after all— the more delicious your lunch is, the more pleased you’ll be after eating it. The problem with this however, is that this is grossly oversimplifying the way in which people enjoy food.

Cost is another factor: a packed lunch shouldn’t necessarily mean you’ve just tossed up ingredients together from home. You can buy lunch, and then bring it with you tomorrow. However, the more expensive this lunch is, the less pleased you will be overall.

Another factor is time: if you’re not buying lunch, you’re probably traversing your kitchen for leftovers and scraps. And if you take too long, it’s entirely possible that you’re not entirely satisfied. The vice-versa is also true: the quicker it took to prepare your lunch, the happier you will be overall in the end.

Thus a more formal relationship can be formed. Hype can be expressed as a function of deliciousness, cost and time. After a few minutes of trying to install the latest version of Wolfram Mathematica, the 3D Density Plots of the function are graphed below. 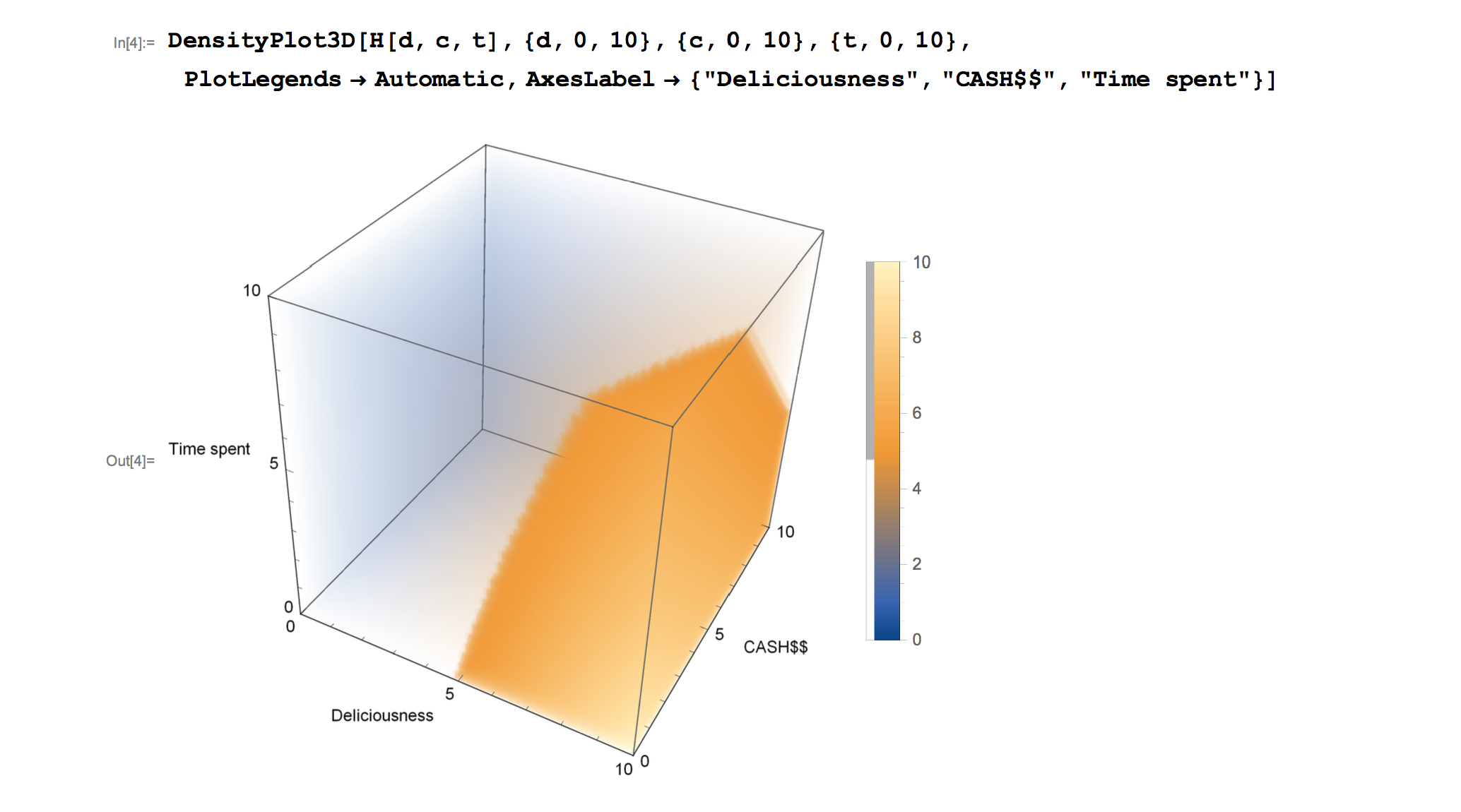 To test this, we asked MASS³ President Keith Beards for his thoughts on his packed lunch. We took the amount of time and money his lunch cost, and then plugged it into our function. We worked out that his hamburger meal was worth 3.6 hype units (out of 10).

And so what’s the optimal packed lunch? As it turns out, the more delicious the food is, the less time and money it takes, you’ll end up with a hype-worthy noon-time meal.

The great Ivan Begic, during his lecture, has decided to share his draft writeup on this mathematical tidbit. You can download the writeup here. 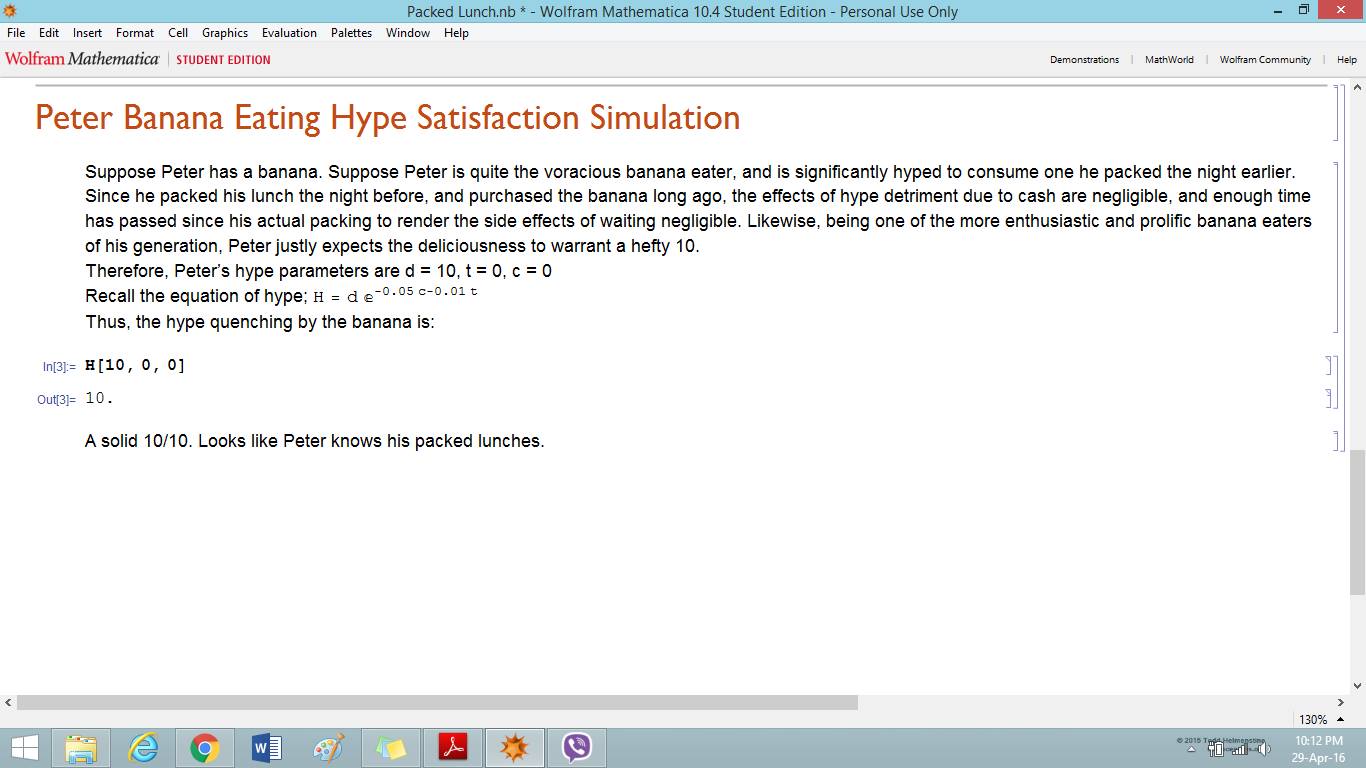 Peter Halat has normalised the above function, to calculate the expected level of hype. The calculations will not be listed here (you’ll have to ask Peter), but it turns out that the normalised level, based on 3 graphs, is about 50 hype units in hyperspace.

Furthermore, Gabriel Dwyer has improved the above function. Because hype is subjective, a person’s level of hype needs to be calculated as a function based on potential other factors.